52 Ancestors in 52 weeks “Is a series of weekly prompts to get you to think about an ancestor and share something about them. The guesswork of “who should I write about” is taken care of. “

I saw a post about this and thought it would be interesting to try.

I guess I should start with myself. I was born in Berlin Germany September 4, 1961. A few weeks after the Berlin Wall went up. My father was in the Air Force and was stationed there.  My mother was very worried about being able to get out of Berlin. I never realized till much later that the wall didn’t just separate Berlin but West Berlin was completely circled by it. West Berlin was “in” East Germany!

We were able to leave and returned to Grand Prairie, Texas in 1963 briefly before moving to Kansas where my father was transferred.

We returned to Grand Prairie in 1966 where we stayed while my father was stationed in Thailand. A few things I remember, seeing Icky Twerp at the Uptown Theater,  listen to tape recordings my father sent to us. We would make recordings to send back to him.

We moved Sioux City, Iowa in 1967, Denison, Texas in 1967 where I stated school at Mayes elementary and played little league football for the Falcons. From there to Houston, TX in 1970. I went to Atkinson Elementary there.

We returned to Grand Prairie in 1974 for good when my father retired. I went to Eisenhower Elementary, Adams Middle School and graduated from Grand Prairie High School in 1980. I played football and ran track until my sophomore year at GPHS.

I began working at C.E. Services in Grand Prairie, an IBM Mainframe service company, part time my Senior year in High School. I began working as a gopher, just running around picking up parts and doing what ever needed to be done. then into the refurb department, paint and body work. I got more into the technical side doing some install-deinstall work and on site maintenance in the DFW area. I returned to the shop doing more feature work on equipment and traveling to do feature work and install-deinstalls. I was able to travel to 46 states and Japan. I transitioned to the Network Administrator for the local office and got my CNE whiles still doing some field and local feature work. I lived in several places in Grand Prairie and Arlington.

I went to work for Carter-Burgess in 1996 as contract Network Administrator. and worked there until 2000. I worked several contract jobs doing computer work and later went to work for Lone Star Park, a horse racing track in Grand Prairie, in 2005.

My Son and I returned to Berlin for my 50th Birthday and the 50th Anniversary of the Berlin Wall where we recreated some of the pictures my parents took. 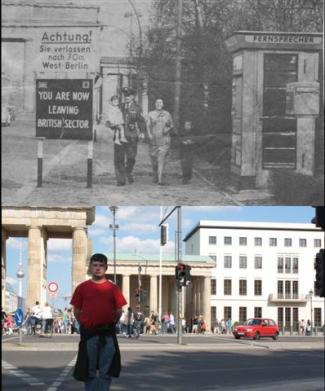 I got started in genealogy around 2014 from watching Finding Your Roots. It just sparked my curiosity so I went to ancestry.com and started searching. Many rabbit holes and DNA tests later I now have 1014 people in my tree dating back to 1613, my 9th great grand father Francis Hutchins who was born in Cornwall, England.

View all posts by Mike Hutchins

This site uses Akismet to reduce spam. Learn how your comment data is processed.